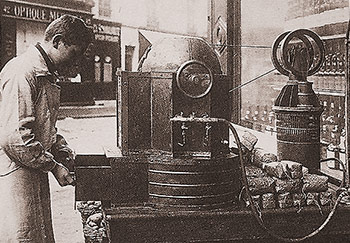 The Mago story began in Milan, the fashionable town in the north of Italy, where Nicodemo Muriale learned the fine art of coffee roasting from masters of the craft. He brought these skills and knowledge to Australia in 1952, settling in the Swan Valley with his beautiful wife Pina.

At first, he established the Muriale continental produce business which flourished, becoming a focal point for the burgeoning migrant community. Then in 1966 Nicodemo imported his first coffee roaster and his reputation as a fine coffee roaster spread throughout the valley.

Expanding the range of coffee products throughout the 70s and 80s, Nicodemo, now joined by his sons, began importing raw coffee beans from exotic locations around the world from the Americas, Africa and Asia. The Mago brand was born and soon became a byword for the freshest, most delicious coffee in the region.

The Mago Coffee showroom is a place where you can indulge your passion for fine coffee, as well as high quality coffee-making equipment, gifts and a select range of teas.

Where does coffee come from?

It is believed that the coffee tree Coffea arabica originated in Ethiopia. Dating back to the fifteenth century, coffee was roasted and consumed in the monasteries of Yemen and Southern Arabia, where the tree was cultivated. Becoming popular from the eighteenth century onwards in the western world, coffee trees were spread throughout the globe, with each region producing its own distinct flavour and characteristics.

Aroma – The characteristics of the odour a coffee creates during brewing.

Body – The weight and texture of a coffee.

Flavour – The total impression of aroma, acidity and body

Espresso – hot pressurised and vapourised water is forced through the ground coffee. This method produces a highly concentrated brew with the characteristic reddish-brown foam known as crema. Fine grind.

Percolator – gravity method where the water is heated and forced into an upper chamber where it seeps down through the ground coffee. The cycle is repeated until the pot is removed from the heat. Coarse grind.

Plunger or French Press – Hot water is poured over ground coffee in a cylindrical glass jug and left to brew for a few minutes. A circular filter attached to a handle is pushed down, forcing the grounds to the bottom of the jug. Coarse grind.

Filter – A conical funnel is fitted with a manufactured paper filter into which a serving of ground coffee is spooned. Hot water is poured into the funnel where it drips into a cup or container. Medium grind.

Capsule – increasingly popular, a small plastic container with inbuilt filter is inserted into the machine. The capsule is punctured and hot water forced through the ground coffee into a cup.

Remember – your coffee beans will keep fresher and taste better if you keep them in an airtight container in a cool, dry, dark space.